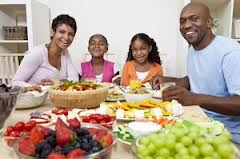 One day, they may eat everything in sight, while on other days, they might turn into such a finicky eater that you’d expect their stomachs to be growling throughout the day. As they approach adolescence, most girls experience increases in their growth rate between the ages of 10 and 12 years, while boys will begin their greatest growth spurts about 2 years later.

In most cases, these kinds of unpredictable eating patterns shouldn’t concern you. During this time of life, children should be gaining about 4 to 7 pounds a year, and as long as your pediatrician tells you that your child is growing normally and his weight gains are fine, don’t worry about the number on the scale. Instead, keep your focus on serving a variety of healthy foods. Expect his appetite to vary, sometimes considerably, from one day to the next. At the same time, children in this age group eat for a lot of reasons besides hunger. Even when they complain that they’re starving, hunger may not be the reason why they want something to eat. They could be upset or tired and relying on food for comfort.

For some children, eating may merely be a habit—for example; they’re used to gobbling up snack foods anytime they’re watching TV or playing video games. When your youngster says that he’s hungry and it’s not a regular meal or snack time, try to determine what’s really going on and whether food might be serving some other purpose. Then problem solve. If your child seems to be bored, for example, help him find an activity that will keep him occupied doing something productive and steer him away from food. Distracting your child’s hunger with a fun, physical activity is one way of achieving goals